While the war with Spain had been waged across the Netherlands, another war had been quietly simmering in the background. Jacobus Arminius, a professor at the University of Leiden in the Netherlands, had been promoting a theology that opposed the five points of Calvinism.
When Arminius died in 1609, the same year as the truce with Spain, his followers began to push his theology on a broader scale. Freed from the warfare with Spain, the Remonstrants, as Arminius’ followers were called, published the Five Articles of the Remonstrants and a war over biblical doctrine began.
Back then, there wasn’t the separation of church and state that we are familiar with here in the United States. Religious divisions were also political divisions. The controversy between the Gomarists, those holding to the five points of Calvinism led by Franciscus Gomarus, and the Remonstrants spread to the politics of the Netherlands as well.
Many leaders, including Johan van Oldenbarnevelt, sided with the Remonstrants. Johan van Oldenbarnevelt was an opponent of Prince Maurice of Orange and began gathering a militia in Utrecht to fight Prince Maurice if necessary.
What would Prince Maurice do? He could side with van Oldenbarnevelt and the Remonstrants and perhaps gain unity in the Netherlands once again. Or he could side with the Gomarists and maybe face a civil war against van Oldenbarnevelt.
In the end, Prince Maurice sided with the Gomarists, those who stood for the five points of Calvinism. 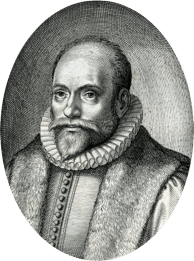 SEARCH WITHIN THESE RESULTS: